Notes: This post was co-authored by Jaimi and Bryan. We have had very irregular access to the internet, so these updates include several stops over a week’s time. 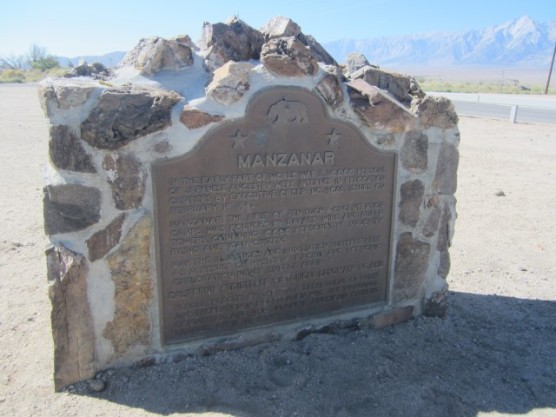 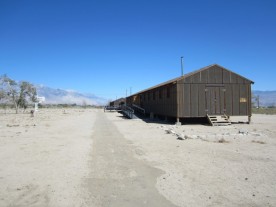 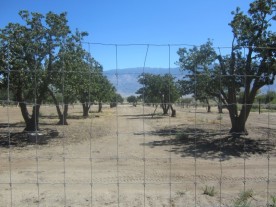 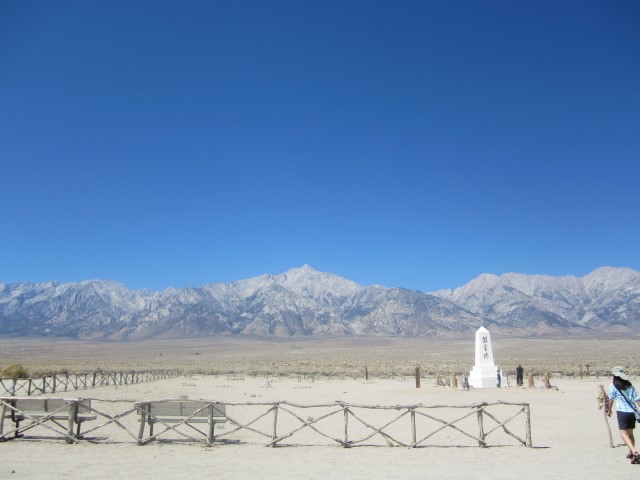 Tuesday morning we got up at sunrise. It was a beautiful morning cool but not cold. After breakfast and turning Merlin around we headed down the dirt road to get back onto the 395. It was Jaimi’s turn to drive leg two and she got a quiet light traffic morning to start out.

Our first stop was directly off the freeway at Manzanar Japanese relocation center/ internment camp. The stunning mountain views contrast the tragedy that occurred here.  It seemed a poignant reminder in the current state of affairs how easy it is to demonize a group of others based on fear and fear mongering.  The stories we read were gut wrenching. We walked the mile to the back of the property and the cemetery obelisk reflecting on life along the way.  One major highlight of this walk was an apple orchard. Some of the original trees are still going strong (with the help of a restorative arborist). The people forced to live in this camp did everything they could to make it their own and try to return their lives to something familiar with a sense of normalcy. The lengths they went to with building gardens, growing produce, etc. was truly astounding. This was most certainly a somber but great first stop on our journey. 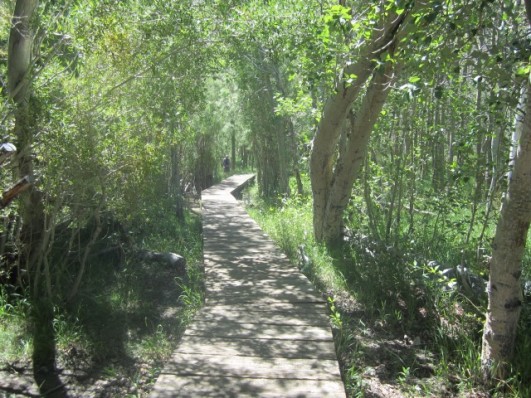 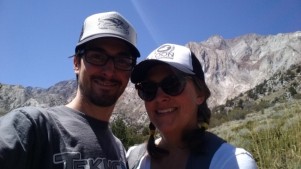 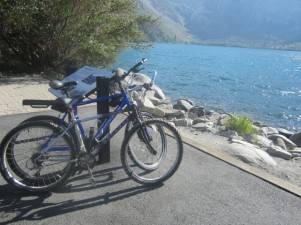 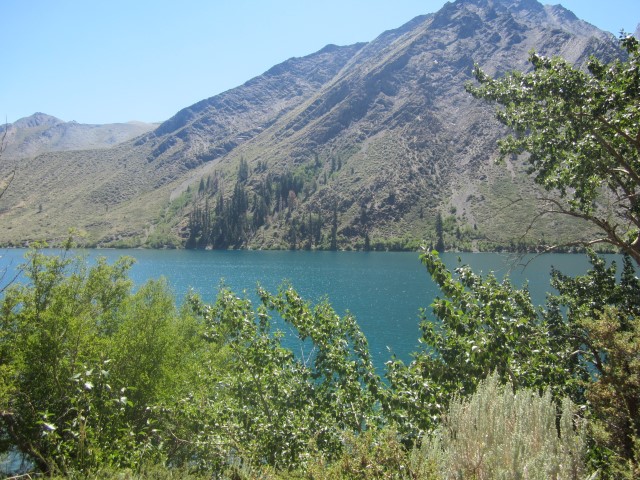 From here it was a bit of a drive on the beautiful 395 till we got to the Mammoth region. We found a really nice spot at Convict Lake (no reservations – first come, first serve). This was a stunning area with a mountain lake walking distance from where we were camping. The color of the water was teal aqua blue almost Caribbean like.

We ended up staying here for 3 nights. Once we got settled into our spot and had lunch we did a short bike ride to get the lay of the land and take a quick dip in the lake (the water was chilly – but SO refreshing). The next day we did the 2ish-mile hike around the lake, had a snack lakeside, and then went back around the lake to a quiet spot for a swim. We saw a bunch of deer and rabbits as well as possible evidence of a bear (we saw some bear scat on the road up from our camp). There were super extremes in the temperature here – days got into the high 80s/low 90s – with the nights dropping to the mid-40s. It was such a nice change to go to sleep and wake up with a chill in the air.

Our first big voyage/day trip in Smartie was to travel out to Bodie, an old gold mining town now ghost town. It is amazing to see a town like that so far from anything. This place was really awesome because it’s so big and there’s still so much of it intact. We walked around for a few hours and still didn’t see everything. On our way back to camp – we saw Mono Lake, Silver Lake, June Lake, and stopped by June Lake Brewery. 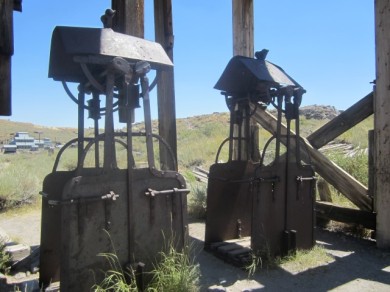 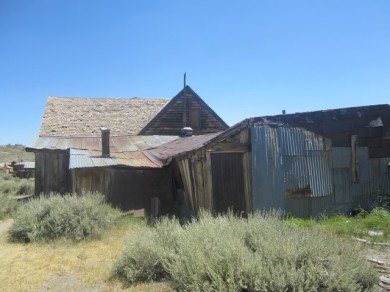 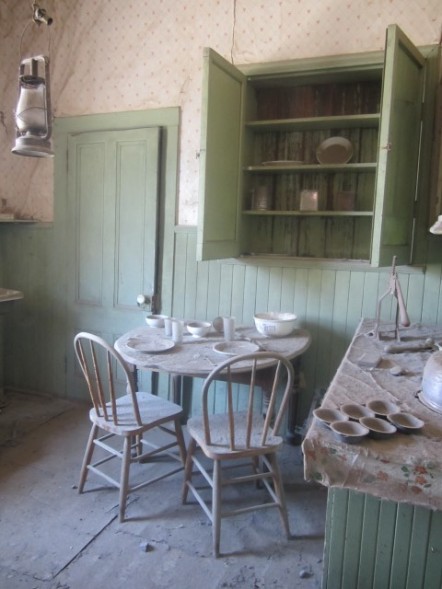 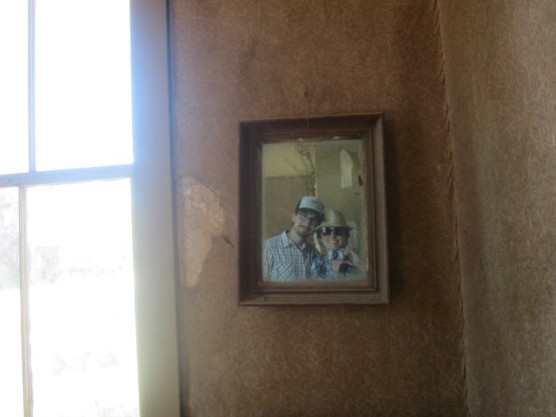 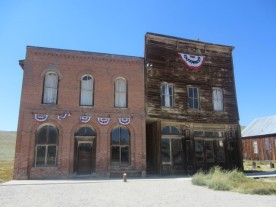 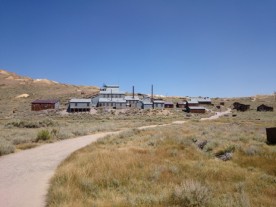 While at Convict Lake, we hadn’t been using our water pump due to a small leak. Thankfully we we had access to water at the campground and just used water bottles and buckets to bring water inside Merlin for washing, etc. (What did we do for showers you might be asking — we considered our dips in the lake a form of bathing – ha ha!). But after a few days we really wanted a legitimate shower. Luckily, our next stop at Washoe Lake State Park had showers and was close to a Home Depot. Clean and cooled off for the evening we we able to enjoy a nice grilled meal outside. 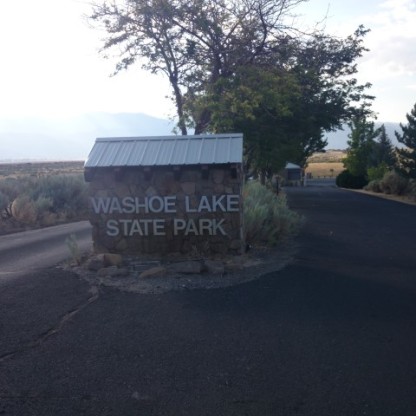 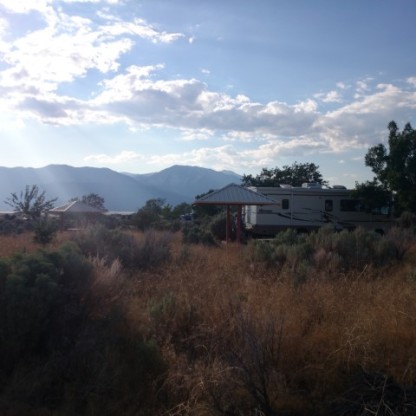 We stayed here one night and did a Home Depot run first thing the following morning. It was unfortunately too warm to stay at this campground for another day. We would have liked to explore it as it seemed to be a wildlife preserve of some sort. The heat and our motivation to get to Glacier before winter sets in is keeping us from getting to see and do too much in this early part of the trip. Hopefully we’ll be able to slow it down once we get to Montana.

Today we drove through the first part of Northern Nevada. Just outside of Sparks, we decided it would be fun to swing by Tesla’s giga-factory. It’s out at the very end of a huge industrial/business park that will someday be booming – but now is just a lot of signs for things to come. As we made our way up the long drive to the factory we noticed a guard shack and figured there was no way we’d get through – but went for it regardless. Even with Bryan wearing a Tesla shirt and us explaining that he had just worked there – we were still denied. The security guard said we had to back-up down the drive and turn-around. Unfortunately for him and fortunate for us – we can’t go in reverse with the tow car hooked up. I gave him the option of us unhooking everything right there at his gate so we could back up both vehicles separately or to just let us through and we’d turn-around. Against every fiber in his body, he opted to allow us to drive up towards the factory to turn-around but said that we were absolutely NOT ALLOWED to take any pictures. We did as we were told and just took a few mental snapshots. Not too much to see – just a really big building out in the desert painted with a red stripe. Sadly the only pic we have is just before the guard gate.  Regardless – we were still happy we got to see it. 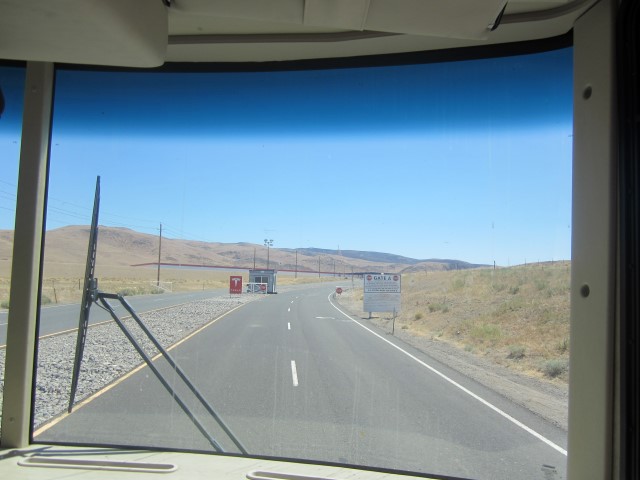 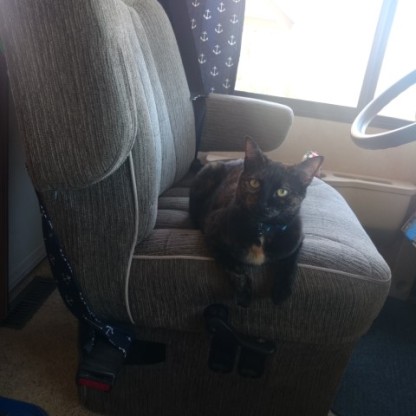 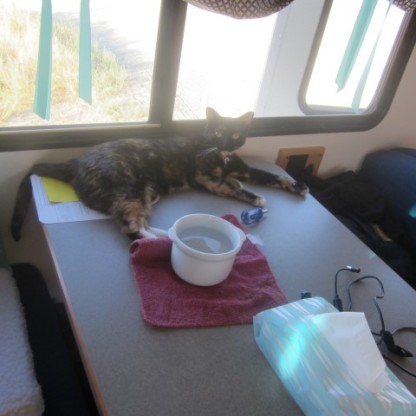 Making our way through Nevada – we were struck by how much nothing there is in the US. Coming from Los Angeles and such congestion of people, cars, etc. – it’s such a relief to see these open expanses of empty land. Today’s stop was in Winnemucca, NV. I picked this city on the map strictly because it seemed like it would be a good stopping point. We’re doing very little advanced planning here – so no reservations. I knew there were a few options of either RV parks or a BLM (free) site – so we just arrived hoping for the best. Finding it hard to swallow a $35 a night stay at any of the RV parks in town, we decided to check-out the BLM area. It turned out to be awesome! After just a short jaunt up a mountain road from town – we were met with several sites nestled in a canyon with scattered groves of trees. The view from our site was truly amazing and the sunsets – mind blowing. It was so cool to be in such a remote spot – but still just 4 miles to town. This area had a lot of farms/ranches, so cows were grazing on the nearby hillsides (so close we could hear them mooing). Also, this area is quite the hotspot for off-roading activities. Besides a lot of dust – it was a pretty sweet site. Being so close to town, we couldn’t resist heading down to the casino (Winnemucca Inn) for Sunday breakfast and a little Sunday-Funday gaming. Bryan used his downtime at camp to break out the solar-panels and give them a test run in the blaring NV sun. I hit up the local Wal-Mart for provisions. I cannot tell you how surprised and happy I was with the selection of food at this Wal-Mart! I wasn’t expecting much and ended up finding items I couldn’t regularly find in markets in LA. Stocked and ready – we hit the road again. 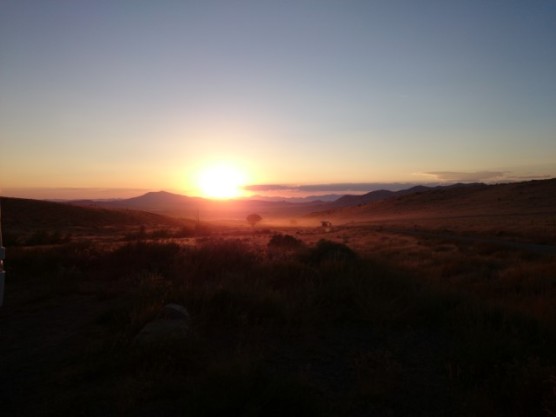 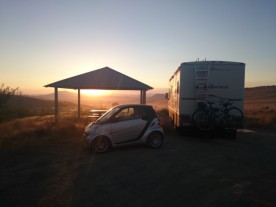 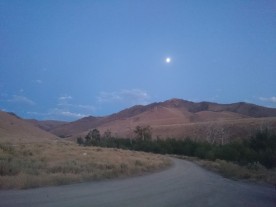 And then some more Nevada

This day took us through another big chunk of Northern Nevada headed loosely towards Salt Lake City, UT – but with no set destination. Wells, NV seemed like an okay stopping point. Knowing that we wouldn’t be getting into this area until later in the evening and not wanting to hunt down some desert campground – we decided that this would be our first night staying at a truck-stop. We were driving on the 80, which is a major thoroughfare for big-rigs, so truck-stops are aplenty. Interestingly they all had their own casinos attached. Unfortunately, after settling in and finding some dinner (another surprise – a decent salad bar @ the Iron Skillet @ a truck-stop, who would have known?!) – we were too tired and skipped out on the slots. We did, though, cruise through three of them and the patrons were an interesting bunch. Surrounded by the hum of truck engines, we managed to get some sleep. We awoke early the next morning and after filling up at the gas station – hit the road once more. 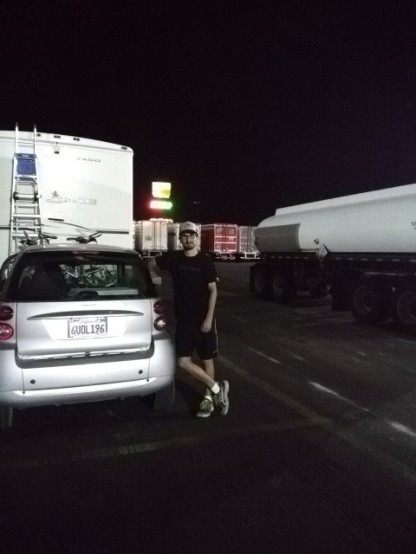 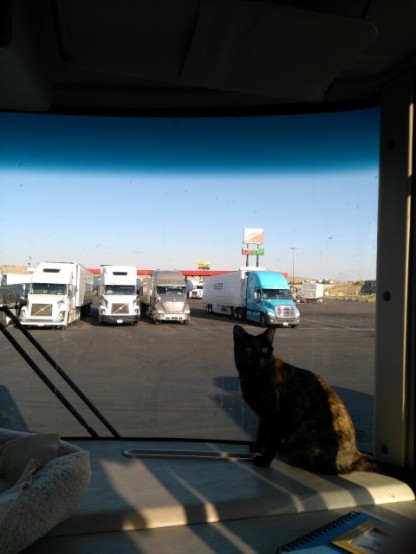 2 thoughts on “Our First Week on the Road: Lakes, Deserts, and Casinos – oh my!”