There are a few observations from our time on the road that I’ve been meaning to write about – so now’s the time!

We ended up getting a late start leaving Bend on Monday so we drove until it started getting dark and did our first overnight at a roadside rest stop. We lucked out that it had a ton of truck/RV spots and the place stayed mostly empty the entire night. We heard a few trucks come and go and a bit of road noise – but overall it was quiet. We’ll try to avoid staying at them, though, since they’re really not intended for overnights – but we’ll use them in a pinch if necessary.

The next day’s drive from Central Oregon to Western Idaho was 4 straight hours of practically nothing. It is still so crazy to see such vast expanses of emptiness. What this drive lacked in people, buildings, and towns was made up for in beauty. I believe that this area is considered high desert – but don’t be fooled; we passed so many different landscapes and –maybe because it was fall—SO many different colors: purple, maroon, green, and yellow. All of this was alongside a winding river that often acted as a mirror and reflected the colors. Other times, it added an amazing sparkling blue/green. Did I take pics of all this – of course not, I was driving – booooooooo!  It’s been really awesome being surrounded by so many different types of environments. I’m excited to see what the South has to offer, as I’ve spent very little time there before.

Time for some interesting facts! Did you know that Eastern Oregon and South-Western Idaho are known as Onion Country? It is – they harvest over 1 BILLION POUNDS of onions a year! It must have been the middle of harvest time as we were driving through. We passed tons of onion fields and countless trucks filled to the top with onions. Onions actually littered the sides of every road we drove on in the area. I begged Bryan to let us stop and pick up a few – but he said we already had enough onions – boooooooooo! 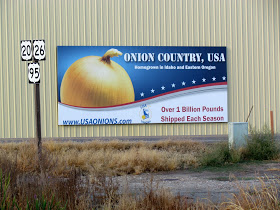 (not my pic, I stole it from the internets)

Another interesting side note: Have you ever wondered what Ore-Ida, the king of frozen potato products, means? Well, I didn’t and it took me passing a big Ore-Ida factory/plant at the border of Oregon and Idaho to figure it out.

I LOVE the sky out this way. Montana may be the Big Sky State – but Oregon and Idaho are the GINORMOUS Sky States. I could honestly fill an entire memory card of pictures of beautiful blue skies full of puffy clouds – I cannot get enough!

Another win for Harvest Host! Our first stop in South-Western Idaho was in their wine country at Huston Vineyards. Gregg and Mary, the owners, welcomed us for an overnight stay and were beyond hospitable. Their dog Hershey fell in love with Bryan and was one of the best welcoming committees ever. We took Greg’s advice and did a bike ride through the countryside and visited another winery. The ride was cut a bit short when we popped every one of our bike tires after riding through a patch of goat head thorns. We couldn’t be too bummed, though, because just a few minutes later we were in the middle of a sun-shower and just beneath a double rainbow. We pushed our bikes back home and enjoyed the view along the way. 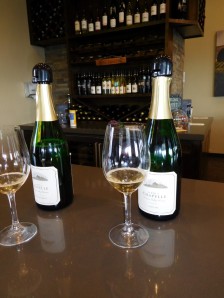 We’re totally loving our Harvest Host experiences. The three we’ve done so far have brought us to little towns that we would likely have not had the chance to visit or even know about and waking up out in the country is pretty incredible.

While we heard great things about Boise, we didn’t have the chance to stay in the area for long. After some errands, we were back on the road headed towards the Twin Falls, ID area.

And also for your viewing pleasure: https://youtu.be/2ggGVazx798 – the most uninspired cat fight ever.