Utah is truly the heavy-weight champion when it comes to National Parks (at least in the western US) and we lucked out getting to see 3 (Capitol Reef was the first and we already talked about in our last post) of the big 5 and even threw in a state park for good measure. Thankfully Arches and part of Canyonlands (it’s divided into 4 sections) are in super close proximity with Deadhorse Point state park right in the middle. We had a few issues in finding a campsite in this area. The free BLM spot that seemed awesome on paper – turned out to be a bowl of fine red dust! We left Merlin at a temporary spot there while we did recon on other possible sites. With the windows open just a sliver and giving that place less than 2 hours, we came back to find EVERY surface in Merlin (including our bed) covered in red dust. I’m not kidding, there were ¼”drifts in the corners of our tables – it was a nightmare! There was no way we were going to stay there any longer than necessary (this was already too long) and luckily we found a relatively inexpensive BLM campground up closer to the parks. Travel days are always a little stressful and chaotic – this one proved to be one of the worst. However, after an hour or two of cleaning up the mess, we were sitting outside enjoying an amazing view with cocktails in hand. 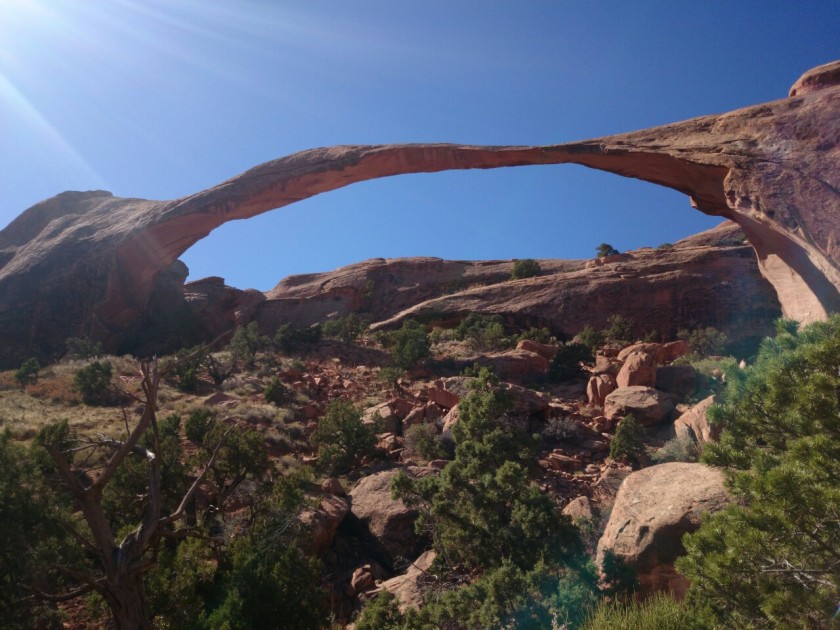 Arches National Park is what you would expect – a landscape full of arches. These are awesome to see and it was neat to learn how they’re created. We did a number of hikes in the park and saw all different kinds of arches including some just starting out and those that are on the verge of collapse – tall, wide, small, huge, etc. These are truly incredible geologic miracles. This park is on the smaller side and by giving it 3 days we were able to see about 90%. We’d have possibly stuck around a bit longer – but there happened to be a statewide school holiday that week and kids were out Thursday and Friday. We had been warned that it would get a little insane at the parks in this area and that certainly was the case. Huge lines getting into the park and more crowds everywhere. We’re lucky to have the time to wait these things out and that’s what we did. After escaping the park, we headed into Moab to explore a bit. Highlights included catching the Boston Bruins’ home opener at a local tavern, an amazing meal at Singha Thai, and a decadent oreo malt shake for the drive home. 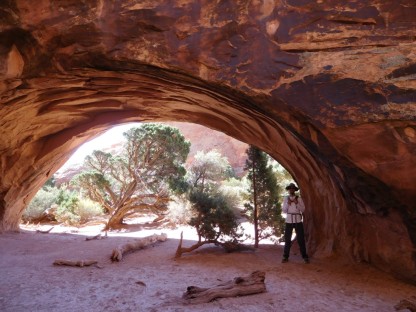 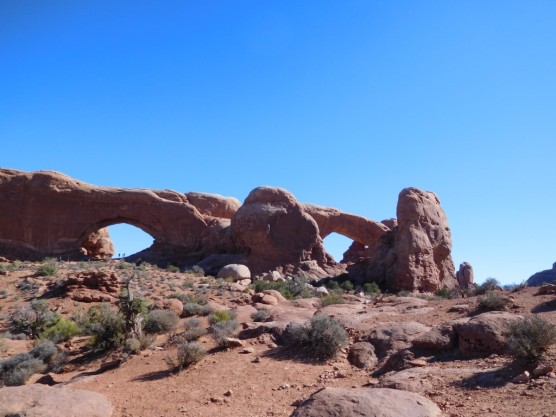 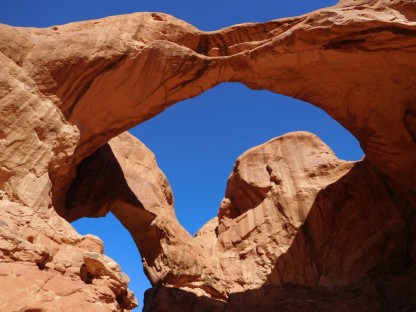 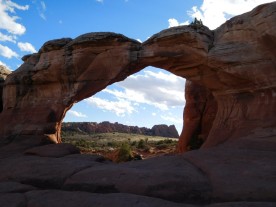 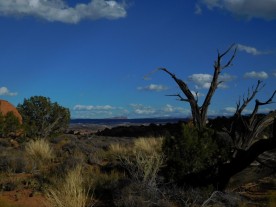 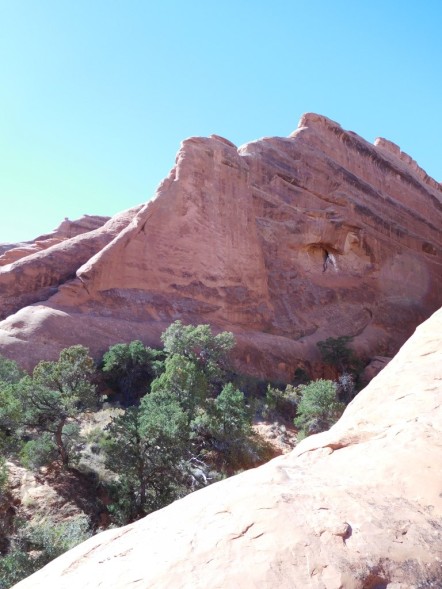 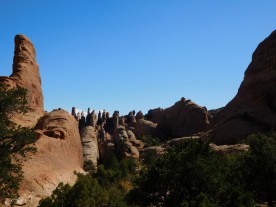 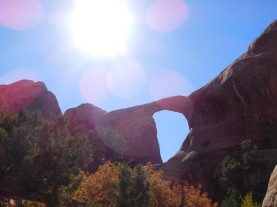 Our plan to avoid the mobs of families was to hit up the 2 remaining parks at off hours. We visited Deadhorse Point the following day in the late afternoon and did the 7-mile rim loop. We had the trail mostly to ourselves except for a few busier lookout points. At first glance, Utah seems like one big red rock – but it’s astounding what variety can come from this material: arches, canyons, fins, rock faces, mesas, plains,… and the red rock at Deadhorse did not disappoint! The steep canyons were breathtaking and you had views of the snaking rivers below on the green canyon floor. It was really cool to do this walk at sunset. 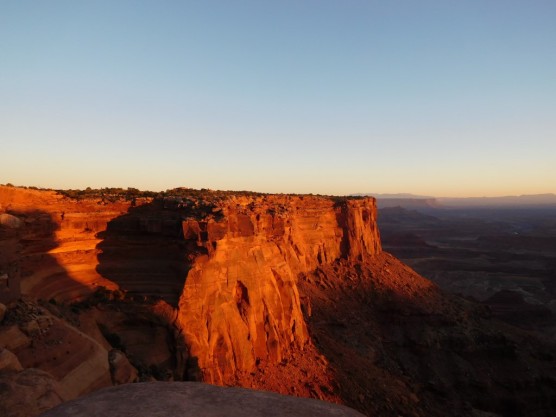 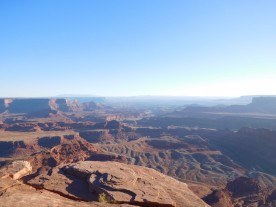 For Canyonlands, we opted for early morning visits (and I mean early, setting the alarm for 5am EARLY). It was interesting entering an entirely new park in the pitch black (not to mention having to avoid several deer families strolling along the road). We really had no idea what was there until the sun started to rise and then it was mind blowing! There were canyons inside of the canyons and then another set of canyons in those canyons. The next day we did the same thing and found an even more insane rim point for sunrise (White Rim Loop) – these views were beyond amazing. I liked Canyonlands the day before – but I fell in love with this park that morning. We rock hopped as far as we could go on this ledge and took in the most beautiful sunrise. 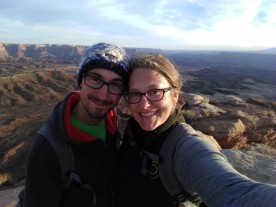 With our Canyonlands appetite whet at this point, we somewhat spontaneously decided on doing a 10+ mile hike that in the first 1.5 mile took us 1400 feet down a cliff face. As we approached the cliff face, we honestly could not tell where the trail went and just crossed our fingers that it was something we’d be comfortable doing. I have to give the hugest props to whoever made this trail! They somehow made the impossible possible – we made it to the canyon floor in one piece!

It was super scary at some points and quite steep, but really not that technical. After I kissed the ground and did a happy dance for surviving the descent, we started the 8 mile loop that took us over and down a huge mesa, alongside the White Rim, and back through a wash to begin our ascent of the crazy-ass rock face. While not nearly as scary going up this beast, it was quite the physical challenge. Needless to say, taking on such a strenuous hike (as the guide book described it) ensured that we had the solitude we had been seeking. Over the hike’s 7.5 hours, we encountered only 4 other hiking couples. I know we keep saying that this or that is the MOST incredible, MOST amazing, blah blah blah – but we really mean every time you guys!!! This hike was all that and more! Definitely in the top 3 of our hiking experiences so far (up there with Iceberg Lake @ Glacier and Sulphur Creek/Narrows @ Capitol Reef). Out off the mesa was a backcountry/primitive camping area that we would VERY MUCH like to backpack to someday in the future.